Betaine HCl and pepsin are gastric-juice components essential to the digestion of food and absorption of most nutrients.  Betaine HCl Pepsin provides optimal nutritional support for a well-functioning digestive system.

Skip to the end of the images gallery 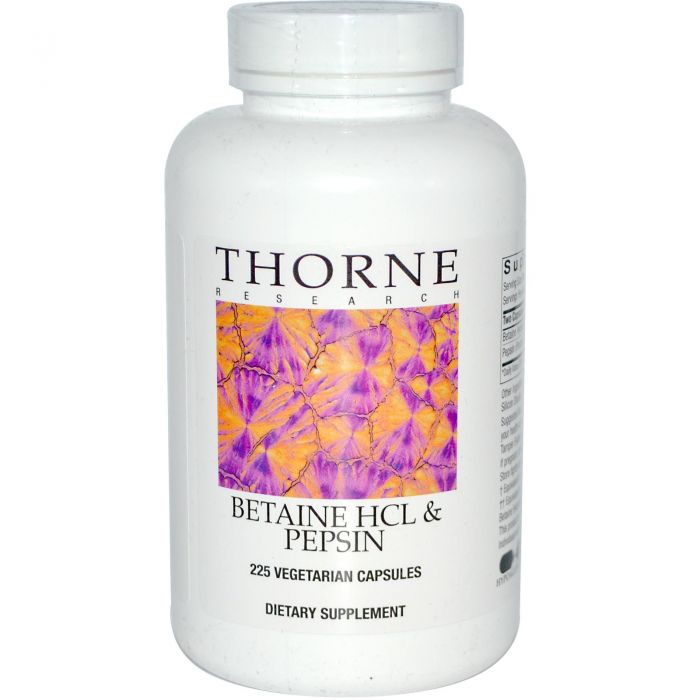 Skip to the beginning of the images gallery
Details
Indigestion can be caused by many things – including inadequate amounts of hydrochloric acid (HCl) in the stomach. HCl secretion in the stomach does several positive things. It assists protein digestion by activating pepsinogen to pepsin, it renders the stomach sterile against ingested pathogens, it inhibits undesirable overgrowth in the small intestine, and it encourages the flow of bile and pancreatic enzymes.* Hydrochloric acid also facilitates the absorption of a number of nutrients, including folate, vitamin B12, ascorbic acid, beta-carotene, iron, and some forms of calcium, magnesium, and zinc.* Numerous studies have shown that hydrochloric acid secretion in the stomach begins to decline with advancing age. Overuse of antacids or acid blockers can also lead to low levels of hydrochloric acid in the stomach, which can result in poor protein digestion.* Thorne's Betaine HCl & Pepsin comes from a porcine source.
You might also like
© 2023 Martin's Wellness